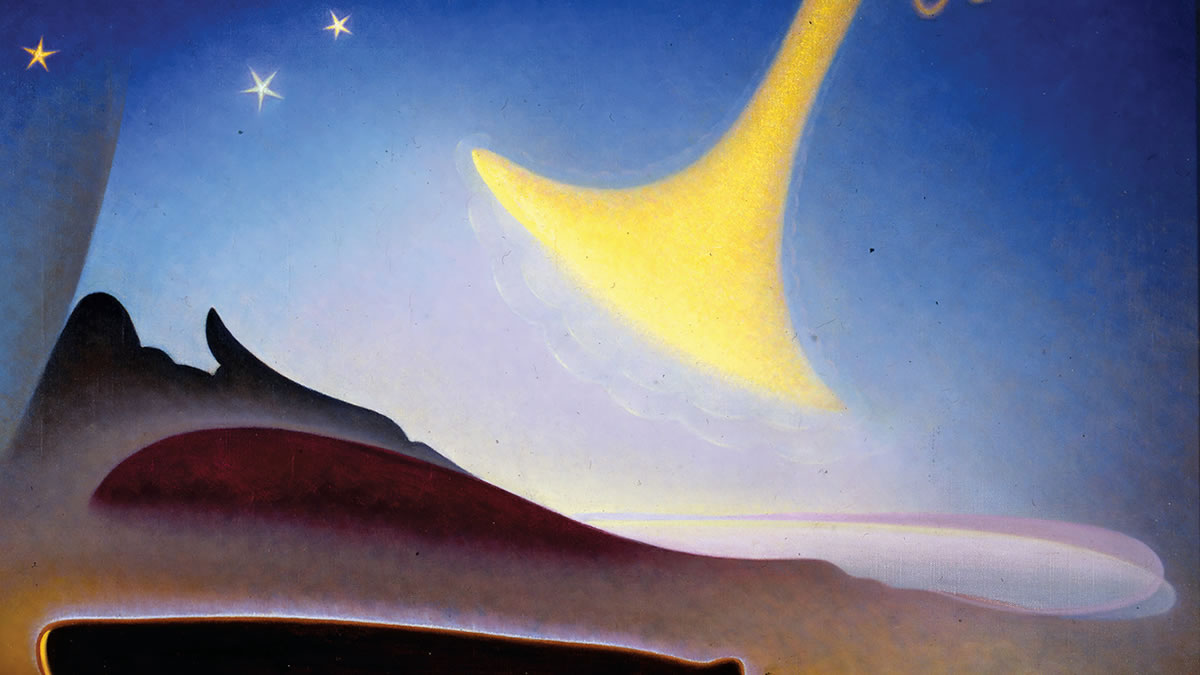 On exhibit at the New Mexico Museum of Art through January 5, 2020, the traveling exhibition Agnes Pelton: Desert Transcendentalist surveys the works of an artist who made significant contributions within twentieth-century abstraction. Her work remains largely unknown despite being compared to Georgia O’Keeffe for her landscape paintings and studying under Arthur Wesley Dow. The exhibition contextualizes Pelton with her peers in the American modernist abstraction movement currently being studied as part of the canon of art history.

The more than forty works on view reflect Pelton’s interests in enigmatic practices such as numerology and Agnes Yogi. Her abstract paintings balance conceptual forms with objects that are haloed and wreathed by unseen sources. Considered a pioneering force in the genre, Pelton’s paintings animate the unseen energy that blooms in the desert. These crystalline studies did not appeal to audiences during Pelton’s life, but set her work at the forefront of modern scholarship about American abstraction of the early 1900s.

Included in this major traveling exhibition of Pelton’s work is a painting from the New Mexico Museum of Art’s collection, Awakening (Memory of Father). The work, from 1943, was added to the Museum of Art collection in 2005 and was recently written about by artist Judy Chicago in the book It Speaks to Me: Art that Inspires Artists.

“Awakening is a prized, and popular, work from our collection. It will be a real treat for visitors to see our painting in the context of so many other artworks by the artist,” said Merry Scully, senior curator of the New Mexico Museum of Art.

Born in 1881, Pelton graduated from the Pratt Institute in Brooklyn in 1906 and began painting abstractions in the mid-1920s in New York. In 1938, she immersed herself further into symbolic representations and became a founding member of the Transcendental Painting Group, an organization of New Mexican artists focusing on spiritual works.

Coming Nov. 25–Aug. 2020: Picturing Passion: Artists Interpret the Penitente Brotherhood explores how twentieth century artists in the Southwest — most from outside the region — were inspired by the Penitentes, a uniquely New Mexican phenomenon.

On Display at New Mexico Museum of Art

Showcases some of the Museum’s most celebrated objects including a real "moon rock," rare replicas of the first
more »

Glass: selections from the collection

From small beads and mirrors to sculpted works, people work with glass all over the world. The Museum of International
more »

From Combat to Carpet: The Art of Afghan War Rugs

The Museum of International Folk Art (MOIFA) presents From Combat to Carpet: The Art of Afghan War Rugs, opening
more »